Majority Of Dogecoin Supply Owned By Only 0.01% Of Holders

Dogecoin was recently added by Chainalysis to their crypto reports. This saw the data platform collating information like on-chain data from the meme coin. The report showed upon release showed holding patterns of Dogecoin investors. As well as transaction data relating to individual wallets. The coin which had seen a lot of growth due to TikTok and billionaire Elon Musk showed some big disparities between holders.

Old investors in this case were grouped as investors who had held on to their Doge for more than two years. These investors had accounted for 30% of the total supply back in July 2020. And today, that number has dropped down to 20%. This is expected in an asset that spent a long time in a bear. Investors look to take profits once there is a significant uptick in the price of the asset.

Dogecoin also experienced a major increase in the number of daily active users in 2021. This number has grown with the price of Doge. Peaking at the all-time high, before correcting downwards as the coin price crashed. On average, on-chain data shows that there are 32,000 daily active users of the meme coin.

There are currently 4 million Dogecoin holders. But surprisingly, the large majority of this number own the smallest share of Doge supply. The data shows that 2.1 of total holders hold less than 100 Doge in their wallets. While the majority of the coins are held by large entities.

To put this in perspective, Dogecoin currently has a supply of 130 billion coins. The Chainalysis data shows that 0.01% of holders hold 82% of the total supply. This puts it at only 535 entities owning the majority of Doge’s supply. Putting the number held by these entities at a cumulative 106 billion coins held between them. 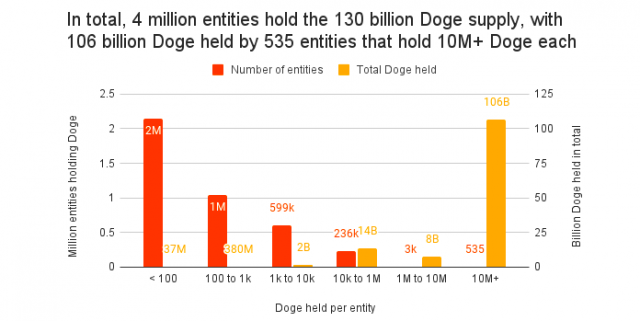 Of these 106 billion coins, 37 billion is held by only 31 investors. Putting the investors’ holdings at over 1 billion coins each on average. These holders have held on to their coins for at least six months to 2 years.

There’s no telling who these entities are. They could range from businesses to crypto exchanges that hold a large number of coins. But it leaves us with two possibilities highlighted in the report; “Either the vast majority of Doge is locked in exchanges and traded by retail, or it is concentrated in the hands of a small number of now-wealthy individuals.”

Bitcoin Is A Gravity Universal Connection

Know The Rate Of Bitcoin, Ethereum, Litecoin, Ripple, Dogecoin And Other Cryptocurrencies:

What Litecoin distancing itself from Bitcoin could mean for its price